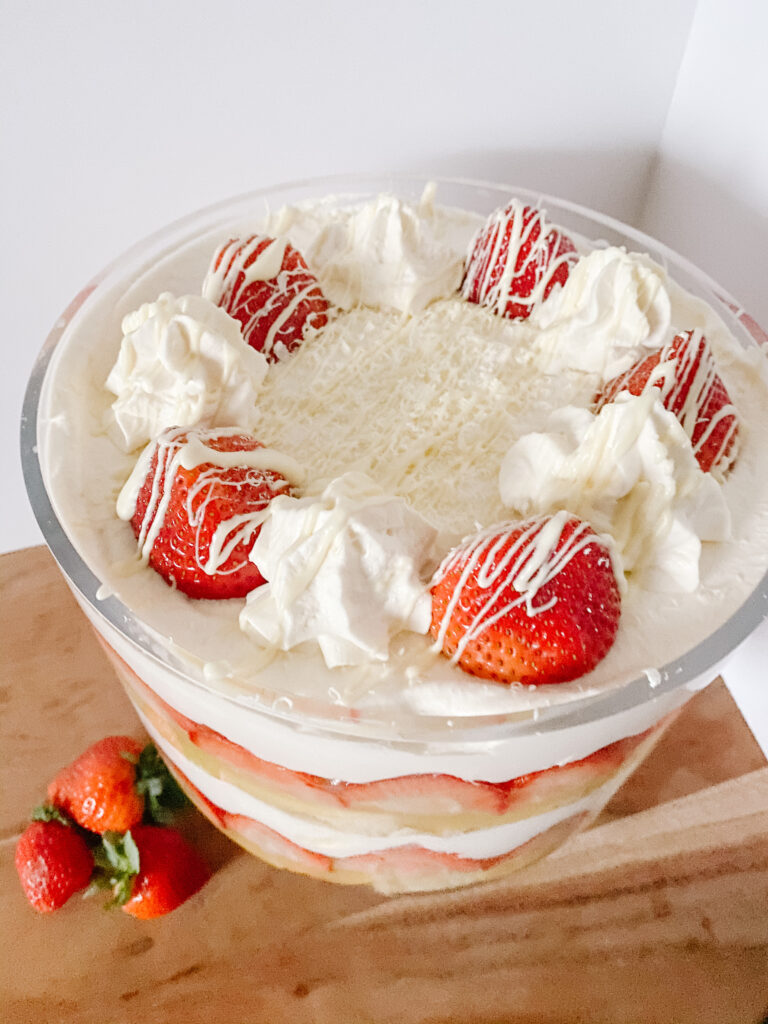 Strawberries and Cream Trifle. It looks like a dream, and tastes delicious. This dessert is layers of goodness consisting of vanilla cake, vanilla jello, whip cream and of course, strawberries. While all of those ingredients on their own are truly delicious, when you combine them together they are out of this world. The best part of this dessert is that it is truly so easy but looks like it took a ton of time and effort.

While I am not going to lie and say that this dessert doesn’t take some time, because it does. But it’s not as much as you would think. The majority of the time is mixing the ingredients together and assembling the trifle. Otherwise it is a lot of passive time, should as waiting for the cake to bake (we do this a day ahead), waiting for the whip cream bowl to freeze in the freezer or the jello to set.

Besides assembly, all the prep is super easy. If you’re making this all in one day I highly recommend starting with baking the cake, mixing the jello and then freezing the whip cream bowl. While all and that happens start to slice your strawberries. If you do everything in that order then you should have enough time for your cake to cool and have all of your other ingredients ready to assemble the strawberries and cream trifle. 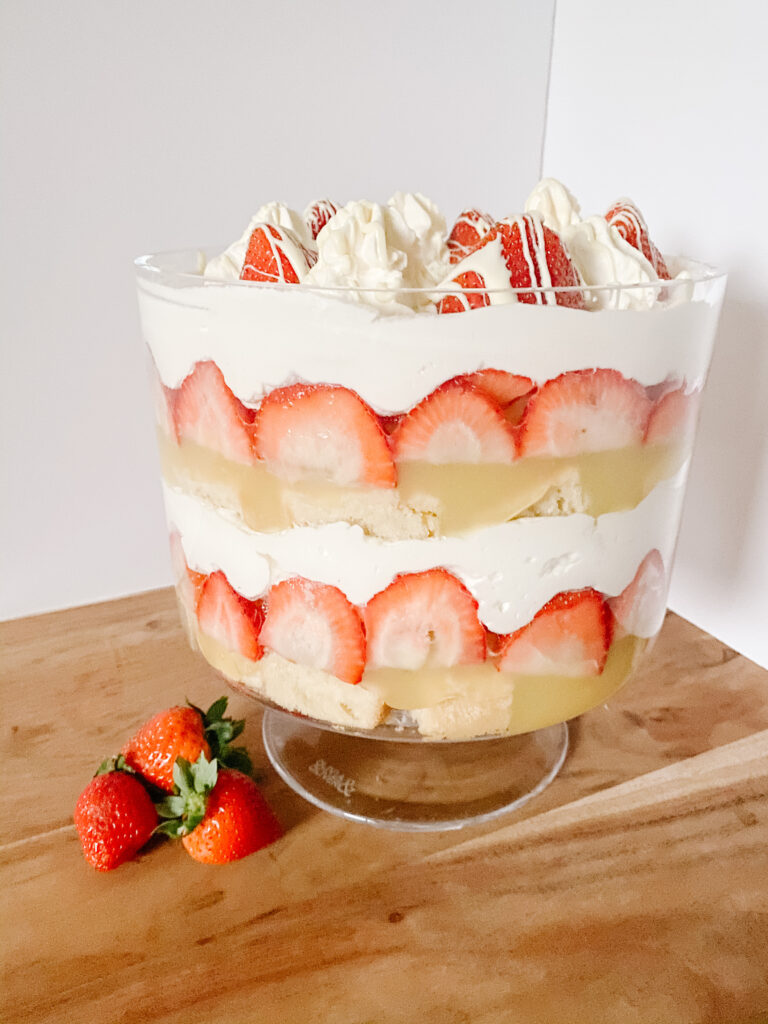 Growing up my Vovo (Grandmother), would make a very similar strawberries and cream trifle to this one every Christmas. It was something that we all looked forward to and it was always devoured. It started to become a bit of a family tradition that we would have this strawberries and cream trifle every year. As my Vovo has aged it hasn’t been realistic for her to make this anymore (she’s 93 now) so over the summer I made one for the first time and everyone loved it. It’s not exactly the same as hers; I’m not quite sure what her secret is, but it’s pretty close.

It’s actually kind of fitting that we made this trifle this past weekend for a small family Christmas dinner. I was on the phone with my mom yesterday and she actually told me that my Vovo had a fall in the middle of the night. Thankfully she is going to be okay, even though she has fractured her shoulder. She is one tough woman. Over the years she has broken and fractured many bones and she always comes out on top. So in saying that this dessert and post has been made while thinking of her.

We’re Having a Small Christmas

I should also touch on the fact that this year Christmas is definitely not going to be the same. No one has been untouched by the terrible virus going around but hopefully you are able to connect with your family in other ways. I know that we won’t be seeing my side of the family since it is not safe. But we are going to make the best of it.

If you’re looking to make this dessert for a small gathering, don’t worry it saves just fine. You can either cover the entire trifle bowl in beeswax wraps (or plastic wrap). Or divide it into containers. Just make sure to eat it within the week. It will get soggy overtime as the cake absorbs the jello and whip cream. You can also make this recipe on a smaller scale in mini trifle bowls so people can eat them individually or you can split them in half. Just half the recipe if you’re making smaller portions.

We truly hope that you enjoy this recipe as much as we do. This treat has been made with so much love over the years and I think it really comes through in the presentation and flavour. While it is a Christmas tradition in our family. A Strawberries and Cream Trifle is good any time of the year. We made this exact one over the summer for my moms birthday and it was such a hit. So let us know if you make your own and how it turns out. If you’re looking for more treat ideas this holiday season check out our Peppermint Bark which makes a great gift or these Homemade Peppermint Marshmallows. 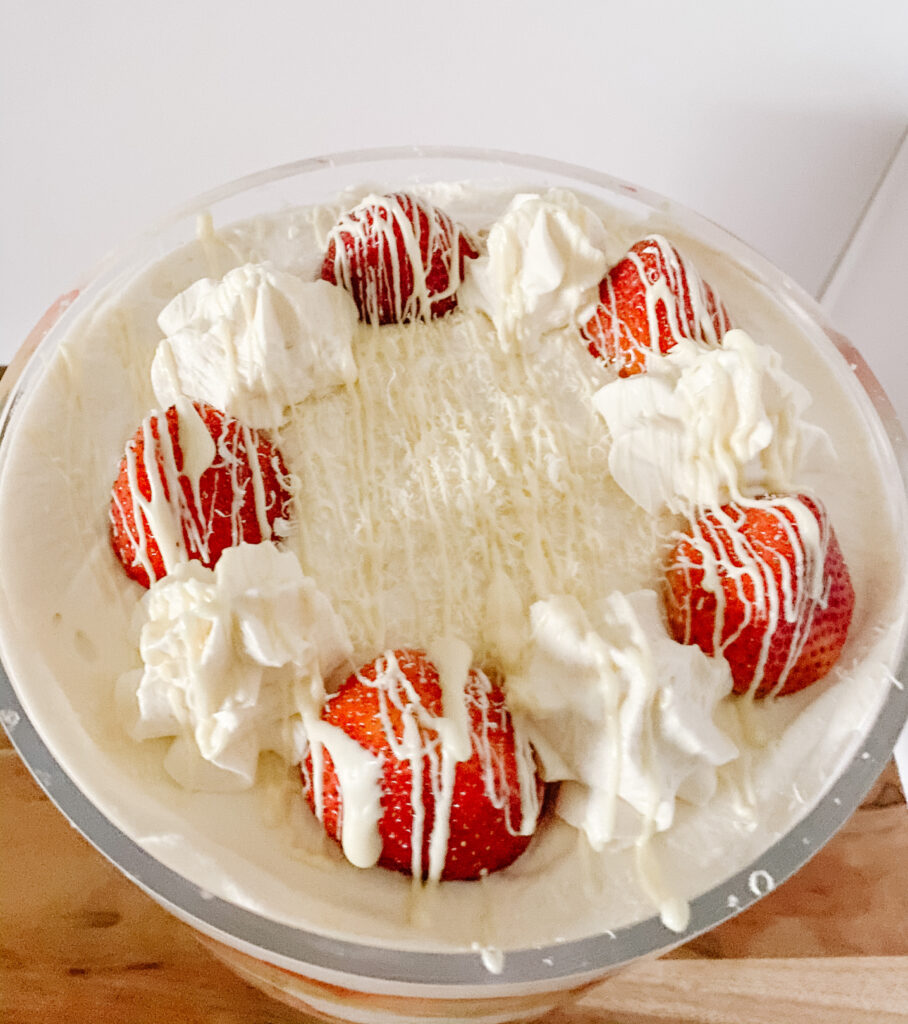 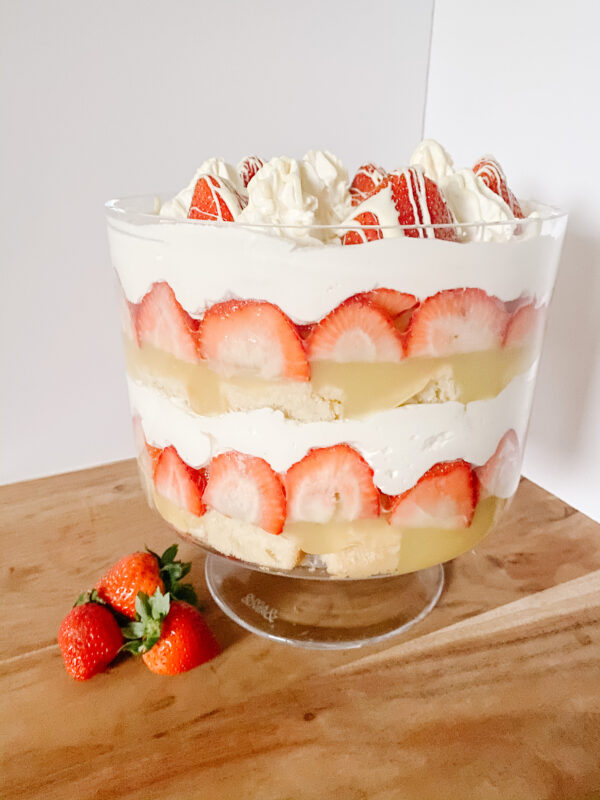