Books to Read While Self-Isolating 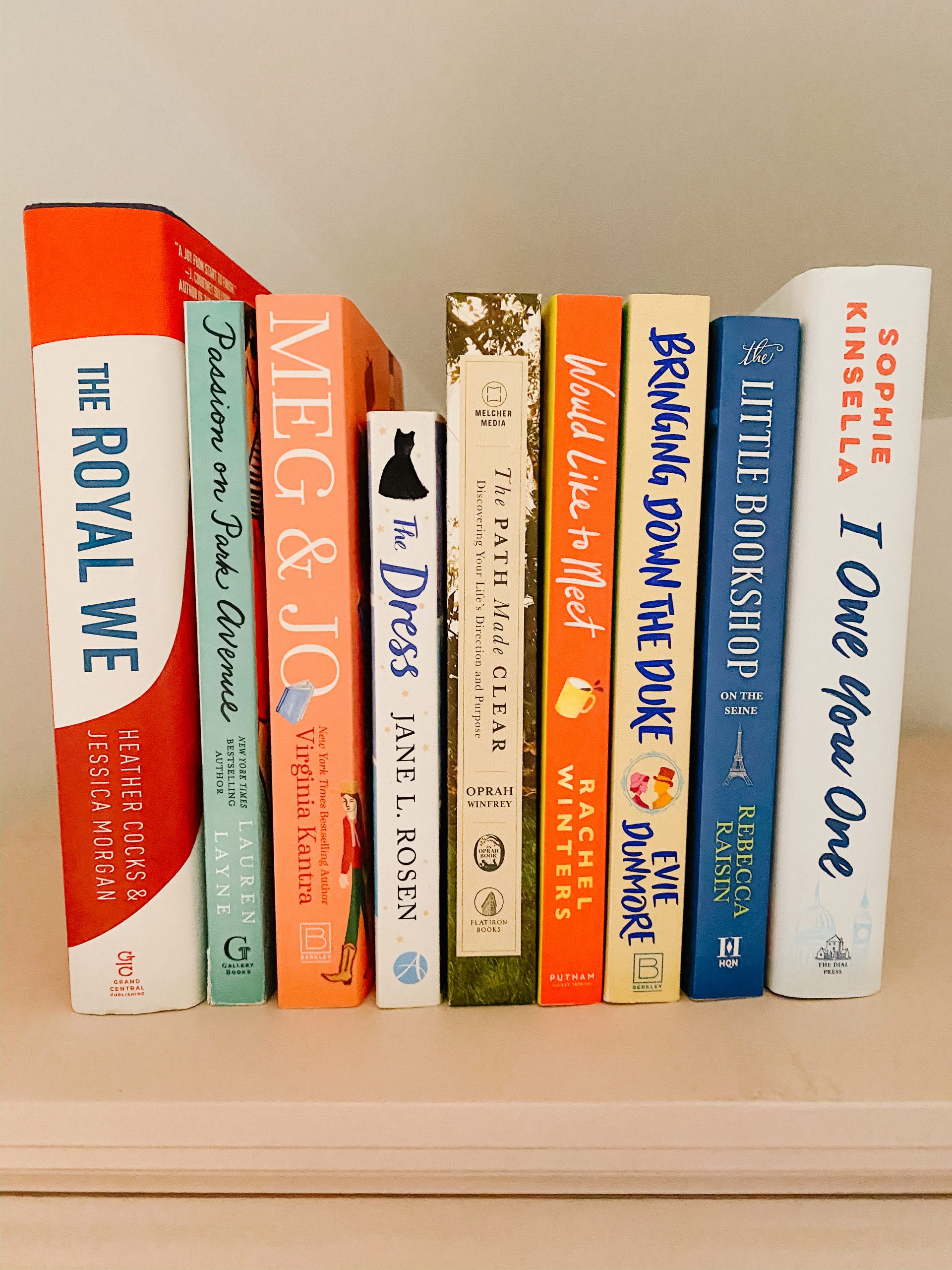 Self isolating can be super frustrating and cause restlessness. Which is why I have compiled 10 books to read while self-isolating. We are living in a very weird time. We are all being forced to stay indoors after just staying indoors after a long but mild winter. It is right around this time of year that I start to itch to be outside and in the garden. Bringing our dogs for long trail walks and preparing for a nice hopefully hot long summer. However, with coronavirus floating around the earth right now, we are all safest in our homes, away from as many people as possible. I truly believe that self-isolating will slow the spread of this virus. It is not only safest for you but for everyone, that you stay home if you can.

In saying that, here are 10 books to read while self-isolating that will hopefully allow you to escape what is going on. Books have this magical power to transport you to a different place and help you forget. Most of these are available on Amazon with same-day or one-day delivery if you have Amazon Prime. Or you can also download them to the kindle app or audible. All these formats are great to read/listen to books and they all have their own benefits. So choose whatever option you prefer!

I Owe You One – Sophie Kinsella

I Owe You One is such a cute book. Fixie Farr has big dreams but they come crashing down when she is taken advantage of. So she spends her days helping her mom run the family business. Everything is going as usual until she finds out her long time crush, Ryan is back in town.

While Fixie is contemplating her life in a coffee shop, a stranger asks her to watch his laptop. What starts as a small normal favour turns into Fixie saving the man’s company. When Sebastian realizes what Fixie he has done, he writes her an IOU on a coffee cup sleeve. Fixie then has to contemplate if she should claim her IOU. At the same time juggling her family, ex-boyfriend and finding her confidence in a world that keeps knocking her down.

Sophie Kinsella is the bestseller author best known for the Confessions of a Shopaholic series. If you loved that book, you are sure to love I Owe You One!

Nine Women, One Dress follows multiple people as they all in some way or another cross paths with “The Dress”. There are many loveable and a couple not so loveable characters. Almost everyone gets a happy in ending, in one way or another. It is truly incredible to see the life of a dress even if it is not the exact same dress. This is written so well that when you go from one character and their storyline to the next you’re not confused or disappointed. You may still have a favourite storyline, but ultimately you will find yourself rooting for all the the characters.

The Royal We – Heather Cocks and Jessica Morgan

The Royal We follows Rebecca Porter as she travels to England from the United States. Rebecca starts school at Oxford University. This is Rebecca’s first trip to England and her first time separated from her twin sister Lacey. It has always been Lacey that was interested in romance and fame. However, Rebecca finds herself living on the same floor as Prince Nicholas, the future King of England. Their first encounter does not go as planned but that won’t stop their future from unfolding.

Spanning over almost a decade. Rebecca and Nicholas face the trials and tribulations of romance in modern royalty. Will there relationship that started over trashy tv and Twinkies, be able to stand the test of time? Is Rebecca strong enough to be with the future King? Does Nicholas have what it takes to put his country before his love?

The second book The Heir Affair is coming July 2020.

Passion on Park Avenue is the first book of a three part series. This novel follows Naomi Powell as she tries to prove her worth in New York City. Intertwined into the lives of two other women, Claire and Audrey, that she learns were her “boyfriends,” wife and girlfriend. Meeting on the day of his funeral, the three women, make a pact that they will watch each others backs. This way they won’t be fooled by another man again.

While Naomi tries to move past the betrayal of her dead ex-boyfriend, she is faced with another enemy. Oliver Cunningham was the boy that tormented her as a child and now he is her neighbour. Will these two be able to put their differences aside to help out Oliver’s aging father? Or will it only further put a wedge between them?

This entire series is full of charm and wit. It will leave you wanting more. I highly recommend purchasing all three books at once because you will fly through them. The other books in the series are Love on Lexington Avenue and Marriage on Madison Avenue.

Meg & Jo is a modern day Little Women. Virginia Kantra retells little women from the perspectives of Meg and Jo. Following Jo as she tries to navigate her life in New York facing career challenges, family struggles and a taboo romance. Meg is also facing decisions about her career and family life while balancing being a mom to twin toddlers. While the original Little Women is a classic, Meg & Jo is a relatable modern story that will bring you along on an incredible journey. The second book Beth & Amy is expected to be released December 2020.

Educated is a memoir of Tara Westover’s life. She had never been in a classroom until she was seventeen years old. Having a very sheltered off the grid upbringing. Her mother taught her about herbal medicine. While she worked alongside her father and siblings in the family scrap yard.

This story follows Westover’s life while she tries to do what she’s expected of, but feels a pull towards education and freedom. With hard work and perseverance Westover is accepted into Brigham Young University and later Harvard and Cambridge. Westover transforms into a strong educated women and is far from the little girl that had never stepped foot into a classroom. This memoir is about following ones dreams while journeying through Westover’s very non-traditional upbringing.

Would Like to Meet is a determined to prove that people can fall in love like they do in the movies. Evie Summers is tasked with convincing Ezra Chester to write a romance script that he has been commissioned to do. Ezra and Evie come to an agreement. She is to prove to him that the meet-cute is a real thing. This leads Evie down a path of spilling drinks on strangers, leaving her number in books all over London and meeting Ben and Anette. A father-daughter duo that meet at Evie’s favourite cafe, every weekend.

Evie is racing against the clock to prove to Ezra she is right and he has to finish his script. Little does she know Ezra has some tricks up his sleeve. Evie is so dedicated to her work that she is blinded to what is happening around her. Hopefully she will convince Ezra to meet his deadline, and find love.

Bringing Down the Duke – Evie Dunmore

Set in 1879 England, Bringing Down the Duke follows Anabelle Archer. She is one of the first female students at Oxford University. Granted a scholarship that is dependent on her commitment to the women’s suffrage movement. Annabelle is required to recruit men of influence to support their movement.

When Annabelle crosses paths with the Duke of Montgomery she doesn’t realize she has met a Duke. The two continuously butt heads while not being able to resist each other. Have they both finally met their match? The Duke is required to marry someone of his status. Which is a good thing since Annabelle doesn’t want to marry at all. The two of them battle it out over their own causes while also battling their passion for each other. Will Annabelle be able to bring down the Duke once and for all?

Evie Dunmore has a second novel from the series A League of Extraordinary Women coming in September 2020. It is called A Rogue of One’s Own.

The Path Made Clear: Discovering Your Life’s Direction and Purpose – Oprah Winfrey

Oprah Winfrey’s The Path Made Clear: Discovering Your Life’s Direction and Purpose is a book truly on finding who you are. It is a compilation of quotes and advice from celebrities and icons, helping to lead you to your life’s purpose. Split up into 10 chapters that bring you on a journey that results in deep thought and self discovery. The short quotes and words of wisdom make this book a very easy read, while still providing insight.

The Little Bookshop on the Seine – Rebecca Raisin

The Little Bookshop on the Seine has a very “The Holiday” feel to it. Sarah Smith is the owner of a small bookstore in the United States. Her friend Sophia owns a larger bookstore in Paris on the Seine a gorgeous view of the Eiffel Tower. Sophie suggests to Sarah that they swap lives and bookstores for six months. Sarah jumps at the opportunity, it has always been her dream to live in Paris. It’s a bonus that she will be able to reconnect with her Journalist boyfriend Ridge while in Paris, after playing months of telephone tag.

However, Sarah may have bitten off more than she can chew, when Sophie’s bookshop sales start to plummet. Add in the employees complete lack of respect and thief among them. Sarah doesn’t want to let Sophie down. Will she able to turn it around, without losing Sophie trust? Will Sarah’s boyfriend finally put her before his career? When will Sarah finally get her happy ending?

There you have it 10 books to read while self-isolating. I hope that you find at least one book that you will enjoy from this list. Majority of these are light hearted and charming. A couple are a little more deep and self reflective. However, I wanted to keep things are light as possible. While we are currently in the face of a pandemic, we need more people to be happy and hopeful. Since we are currently surrounded by so much sadness and negativity.

My hope is that you will be able to pick a book from this list and have a little escape from reality. I have linked all of the titles to amazon where you can either purchase a physical copy or a digital kindle copy. I do recommend the kindle option as of right now because Amazon is trying to cut down on deliveries. Also, then you don’t want to wait for the book to show up in the mail. Don’t forget there is always the option to purchase on audible if you have a subscription. This is a great idea if your sister, mother, daughter or anyone else you’re self-isolating with wants to listen along as well.

Stay happy and healthy during this very trying time. There is a light at the end of the tunnel. Until then, enjoy these 10 books to read while self-isolating! Please let us know if you have any other book suggestions in the comments below. Also, if you’re trying to find other options to stay healthy check out our Top 5 Diffuser Blends.

1 thought on “Books to Read While Self-Isolating”